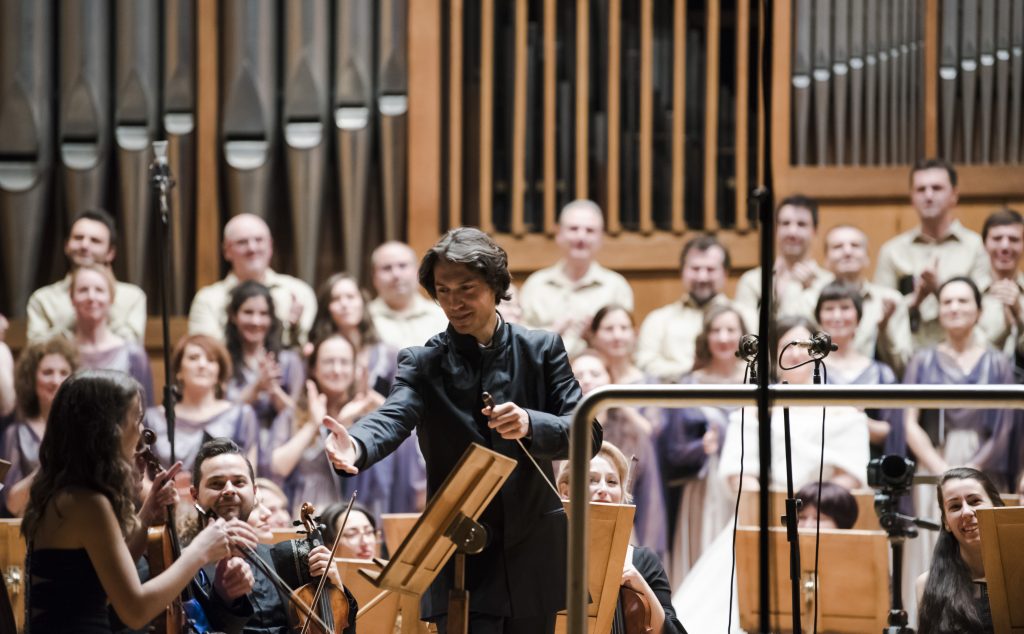 Hailed by the press as “a philosopher among conductors”, Yordan Kamdzhalov was born in Bulgaria in 1980. Following his musical studies in Sofia and Berlin he continued to refine his conducting skills at international academies and masterclasses with Lorin Maazel, Bernard Haitink, Pierre Boulez, Simon Rattle, David Zinman, Daniel Barenboim, Vladimir Jurowski and Esa Pekka Salonen. He became Artistic Director and Principal Conductor of the international Berlin Ensemble Innorelatio in 2006 and served as musical director at the Schlosstheater Rheinsberg from 2007 to 2009. In 2009 he was awarded first prize at the International Jorma Panula Conducting Competition and one year later became a prizewinner of the Gustav Mahler Conducting Competition in Bamberg. He was named “Best Opera Conductor of the Year” by Deutschlandradio in 2010 and “Musician of the Year” by The Bulgarian National Radio in 2011.

In 2011, at age 30, Yordan Kamdzhalov was unanimously appointed General Music Director in Heidelberg and named Chief Conductor of the Opera, the Philharmonic Orchestra, and the Schloss Festival. The same year he became First Guest Conductor of the Sofia State Orchestra and created a foundation to promote talented young musicians. He has since worked with over 50 international orchestras and opera companies such as in London, Paris, Berlin, Hamburg, Zurich, Helsinki, Lisbon, Singapore, Tokyo, Baltimore, Boston, Los Angeles as well in Wiener Musikverein – Golden Hall. Following his triumphant debut with the New Japan Philharmonic Orchestra he has been a regular guest conductor in Japan. With the rising demands of his international career Kamdzhalov decided to not extend his position as General Music Director beyond 2014, although he remained Heidelberg’s Principal Guest Conductor. His tenure as GMD saw the city’s highest number of ticket sell-outs in the history of its orchestra and opera and his rendition of Bruckner’s Third Symphony led the Bruckner Journal to write: “I have now heard many performances of the finale, including that by Sir Simon Rattle and the Berlin Philharmonic, but at this point Kamdzhalov outshone them all.”

Yordan Kamdzhalov founded the “Genesis Orchestra” consisting of musicians and soloists from leading European orchestras in 2016, and in November of that year he made his celebrated debut at the Munich Philharmonic Gasteig.

In October 2017 Maestro Kamdzhalov was awarded the most prestigious German music prize ECHO Klassik for Concerto Recording of the Year (category: 20th/21st Century) together with the piano duo Genova & Dimitrov.

In March of 2018 he conducted the Genesis Orchestra for a sold-out concert in Sofia, Bulgaria, featuring the Grammy Award winning Australian singer/composer Lisa Gerrard in Górecki’s popular Symphony No. 3 which was subsequently recorded for international CD release. Shortly after, Mr. Kamdzhalov made his highly acclaimed debut in Doha, conducting the Qatar Philharmonic Orchestra in a concert held in celebration of Europe Day.

As of September 2018, Yordan Kamdzhalov has been appointed music director and chief conductor of the opera house in Rijeka – the Croational National Theatre Ivan Zajc.

Commanding a highly versatile repertoire spanning all periods of European instrumental and vocal music into the 21st century, Kamdzhalov views the arts, science and philosophy as a synthetically connected unity. Taking a particular interest in physics and astronomy, he is engaged in a scientific study on the “globalization of musical structure”. In 2014, NASA and the International Astronomical Union named a planetary body (planet No. 52292) “Kamdzhalov” after the charismatic conductor.